“I was aboard the Kingfisher when I experienced the thrill of the open ocean for the first time – I loved this boat….” 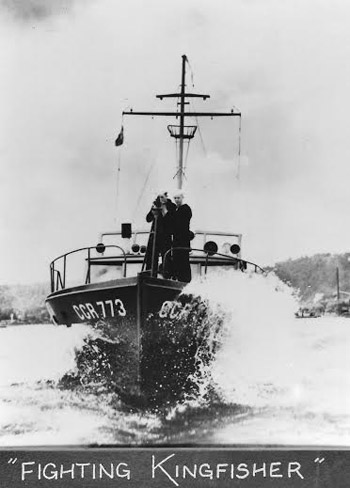 Kingfisher 1941: The Kingfisher on patrol during World War II.

Faced with no other option, the Lincoln County Historical Society commissioned the Port of Toledo Boatyard to demolish the historic wooden charter vessel, Tradewinds Kingfisher. The 50ft National Historic Register vessel, long associated with Depoe Bay, was in an advanced stage of deterioration and posed a potential environmental hazard should it sink. During the demolition process it was discovered the deterioration of the boat was even worse than imagined.

Prior to demolition the exterior of the boat was scanned using 3D laser technology. The laser scan produced a very exact electronic record to be utilized by future researchers, model builders, and boat builders. The scan was so exact it was discovered the hull had actually twisted to one side, perhaps from a collision in its past, or with deterioration.

During the demolition process all salvageable parts were removed and added to the Historical Society’s collection to be used in exhibits. Its vintage 1950s engine and other parts were recycled. Historical Society Director Steve Wyatt expressed his gratitude for the salvage work carried out by Port of Toledo staff. “They were very respectful of the boats’ history and carefully removed all that could be salvaged.”

“It had to be scuttled,” stated Historical Society Director Steve Wyatt. Like many locals and tourists, Wyatt has fond memories of the Kingfisher. “I was aboard the Kingfisher when I experienced the thrill of the open ocean for the first time – I loved this boat. As a museum professional my job is the preservation of objects, this was a difficult decision. While removing parts of the Kingfisher a couple of weeks ago I fell through the deck when it collapsed, reaffirming how bad its condition was.”

Kingfisher 3-D Scan: Every half inch of the exterior of the Kingfisher was scanned by Global Inspection Services of Portland to document the shape of the boat. From the scan data, design drawings or a 3-D drawing or model can be produced.

The Tradewinds Kingfisher was built in 1941 by Westerlund Boat and Machine Works of Jantzen Beach, Oregon. Just months after the Kingfisher owner and skipper, Stan Allyn (1913-1992) took possession of the Kingfisher the US entered World War II. Allyn offered his new boat up for wartime use. The Kingfisher served as a boarding and patrol craft from Astoria to Coos Bay on the lookout for a possible enemy invasion. At wars end, the Kingfisher returned to Depoe Bay to serve as Allyn’s flagship charter boat. Many charter boats built in the 1950s copied the Kingfisher’s then innovative styling. The Kingfisher was placed on the National Historic Register in 1991 and retired from service in 2000.

In 2001 the Historical Society accepted the Kingfisher as a donation, and went to work trying to drum up essential public support that would enable the organization to properly curate the boat. The Society’s long-term goals for the Kingfisher included offering Yaquina Bay tours aboard the historic vessel.

Properly caring for the Kingfisher required an annual investment of approximately $15,000, far exceeding the Historical Society’s annual budget for curating all other 40,000-plus objects in its collection. Moorage fees alone are $395 per month. A shipwright’s survey in 2012 concluded the Kingfisher needed over $70,000 in renovations and repairs. To date the Historical Society has invested over $54,000 in the Kingfisher. Donations from a small, dedicated group of individuals and businesses of time and materials total an estimated $81,000.

Past publicity efforts aimed at generating awareness of the Kingfisher’s plight received virtually no public response. Without demonstrated public support grants were not possible. The Historical Society offered the vessel to other museums including the Smithsonian and the Center for Wooden Boats in Seattle and others, all of whom turned the Kingfisher down. A few individuals came forward wanting to assume ownership of the Kingfisher and save her, but were unable to rally the needed support. Nationwide, a growing number of aging wooden boats are being scuttled. For the Society and a small band of Kingfisher aficionados, it was not unlike pulling the plug on a terminally ill family member. The Board of Directors of the Lincoln County Historical Society voted unanimously to dismantle the Kingfisher.

An extended article on the history of the Kingfisher appears in the Society’s best selling book The Bayfront. The Society, in conjunction with the Allyn family, is planning an exhibit on the Kingfisher at the Pacific Maritime & Heritage Center that will incorporate pieces salvaged from the boat and possibly the computer laser scans. The Historical Society also has in its archive collection papers and records from Stan Allyn, the designer and longtime owner/operator of the Kingfisher.

The romantic scenery surrounding the Yaquina Bay lighthouse has drawn many to its steps. If you fancy a walk down lovers lane, you may find yourself enthralled by the views of the tower overlooking the wild winter waves and beach below. How lucky are we to celebrate not just Valentines Day but Oregon’s birthday as well? Photo from the vast archives of the Lincoln County Historical Society
When the Bayfront looked like Christmas! January 1979 Photo by the late Scott Blackman. From the vast archives of the Lincoln County Historical Society Newport Oregon
Then/Now The CD (Clarence Dean) Johnson house was built in 1922 for the Pacific Spruce Corporation lumber operation magnate. Although these two views are quite different, one can't deny the sustaining style of this classic, colonial style home. Located in Toledo Oregon it was built with much of the spruce produced at the mill, including full span wood floors. "Then" photo is part of the vast collection at the Lincoln County Historical Society Newport Oregon (LCHS #3748) "Now" photo was found on the internet as the house was recently up for sale.
Farewell to the Undersea Gardens - a staple of Newport's Bayfront for nearly 50 years... "It has been a great journey, but it is time to move on" said David Heater, General Manager of Mariner Square. Built in 1964 as a floating barge aquarium the Undersea Gardens has been home to over 1,000 types of fish and other aquatic species native to Oregon's coastal waters. The company worked close with their crew and local community members to relocate the aquatic species and to remove the barge in an extremely environmentally sustainable manner. Many changes are currently in the works at Mariner Square and the updated attractions are expected to re-open in Spring 2020. To stay up to date be sure to bookmark this url: http://marinersquare.com Photo of the Undersea Gardens was taken during the visit from then presidential candidate Robert Kennedy around 1968 and is part of the vast collection at the Lincoln County Historical Society Newport Oregon Photo of the floating barge departing was found on Facebook

From Our Gift Shop

Express your sentiments in a totally unique way!

Use your own words on these historic Yaquina Bay notecards. Produced by LCHS staff and printed locally, these blank notecards with mailing envelopes are available exclusively at the Pacific Maritime and Burrows Museum gift shops. Four different images, artistically photographed on the Newport docks by the late Roger A. Hart in the 1940s -1960s.

Amazon will donate a percentage of your purchases to the Lincoln County Historical Society whenever you shop on AmazonSmile. To learn more, or to start shopping, CLICK HERE

Sign up for the Community Rewards program by linking your Fred Meyer Rewards Card to the Lincoln County Historical Society (non-profit # 81136). To learn more, CLICK HERE

Both Museums are open
Thursday thru Sunday, 11am to 4pm.

The Research Library is open Wednesday thru Friday, 11am to 4pm by appointment.

Admission to the Burrows House is by donation. Admission to the Pacific Maritime Heritage Center is $5 for adults, kids under 12 get in free. Members receive tickets for free admission.

Onsite parking is available at both museums, and all Historical Society buildings are wheelchair accessible.